Sumitomo Electric is one of the world’s leading manufacturers of high-voltage power cables and overhead conductors. We offer a wide variety of products to fulfill many different needs, and have extensive experience with product development and installation. In 1921, we supplied the first high-voltage submarine cable in Japan, which at the time was the world’s longest submarine cable system, and since then we have provided more than 6,000 km of submarine cable to locations around the world. In 1979, we manufactured the first high-voltage underground DC cable system in Japan, and in recent years have provided HVDC cable for interconnecting power grids in Europe. 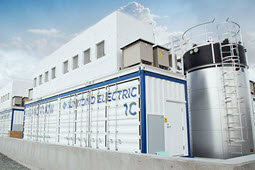 Redox flow battery project in California
In addition to the power cable products listed below, Sumitomo Electric develops solutions for renewable energy. This includes concentrator photovoltaic systems, monitoring equipment for PV strings at solar power plants, and redox flow batteries for storage of electricity generated from renewable sources. A large-scale demonstration project of our redox flow battery was started in San Diego in 2017. More information about this project is given below; click here to jump to that section.

We also have extensive experience with HVAC projects both underwater and underground. For underground HVAC projects, we have delivered cable installed in various ways such as direct burial, horizontal directional drilling, duct pipe installation, and vertical shaft installation. Some of the special features we have for HVAC cables include an extruded aluminum corrugated sheath to provide increased flexibility and radial strength of the sheath, better protection against moisture, and larger fault current capacity. We have also developed a unique XLPE triplex cable design to solve oil-leak problems with existing fluid-filled pipe-type cables, and offer a special anti-termite jacket made from FR polypropylene to prevent termite damage in places where this can be an issue.

Some applications of HVAC cable systems:

We offer many types of high-quality overhead conductors in order to meet a wide range of project requirements and environmental conditions.

In addition to cables, we have developed many types of cable accessories to meet a wide variety of customer requirements. One example is a metal-enclosed GIS termination for outdoor termination that complies with the IEC 62271 standard, which has a Y-branch joint for XLPE and fluid-filled cables. For joints, we offer transition joints that can be used to replace existing fluid-filled cables with new XLPE cables, and we also provide offshore joints for the installation and repair of transmission lines from offshore wind farms.

OPTHERMO is a temperature sensing system that uses an optical fiber as a sensor to continuously measure temperature along the fiber. The optical fiber is embedded inside or attached to the power cable. This method is ideal for performing real-time measurements of cable temperature over a long distance with significantly high temperature and spatial resolution. OPTHERMO can also be used for applications such as downhole monitoring of oil/gas wells, monitoring of LNG tanks, and fire detection in tunnels. 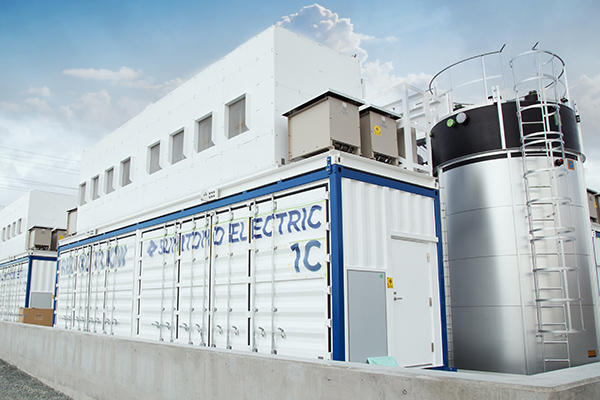 Throughout the years, SEUSA has introduced many advanced products in response to changes in technology and society. For example, consider the growing use of renewable energy. As more solar plants are built to generate electricity for regional power grids, there needs to be an effective way to store this electricity for people to use at night, when demand is up but the sun is down. One solution to this challenge is Sumitomo Electric’s redox flow battery, which SEUSA helped bring to Southern California in 2017.

The redox flow battery is a large-scale rechargeable battery that can be connected to the power grid. In addition to storing energy, it works to stabilize the grid as more sources of renewable energy are added. The system developed by Sumitomo Electric is based on a vanadium electrolyte, and offers many significant benefits: a long service life of 20 years, unlimited charge/discharge cycles without degradation, extremely safe operation, accurate monitoring and management of available capacity, and more.

In cooperation with Japan’s NEDO and the State of California, Sumitomo Electric started a 4-year project to evaluate the performance and economic value of a vanadium redox flow battery (VRFB) system. The system is installed at a substation operated by San Diego Gas & Electric. It provides 2 MW/8 MWh of electricity, enough to power approx. 1,000 homes for up to 4 hours. Notably, the system is one of the largest redox flow battery installations in the United States, and in December 2018 it became the first instance of a flow battery system to be connected to a wholesale electricity market in the US. Through this project, participants have gained many valuable insights into how to manage a growing amount of renewable energy.

Press release (Jan. 25, 2021): NEDO extends redox flow battery system project to conduct an additional demonstration of a microgrid as a solution to power outages in California