An Inside Look at Sumitomo Electric Device Innovations USA 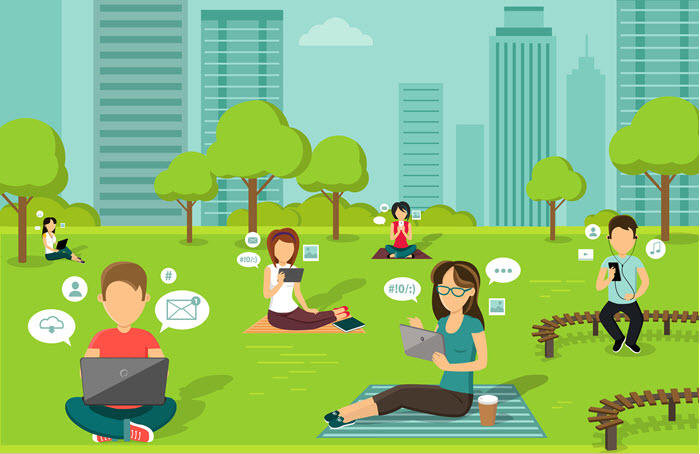 Millions of times a day, in every part of the country, all sorts of thoughts and feelings and ideas and requests are communicated through cell phone networks without even the slightest concern about the underlying technology that makes this possible. When you speak into your phone, you start a complex sequence: voice turns into electronic signals and then into radio waves, which then get picked up by a nearby cell tower, which then get converted into light pulses that zip toward a cell tower in the other party's area, and at that point the process repeats in reverse. It all happens seamlessly and at unimaginable speed. The only time you might notice is when it doesn't work as expected, or when you happen to see a cell tower in the distance. Curiously enough, for all its significance in our daily lives, the network is pretty much invisible.


If you were to look inside a communications network, however, what you would find are sophisticated components of the kind manufactured by the Sumitomo Electric Group. Within the cell towers, there are microwave/RF (radio frequency) power amplifiers made from materials such as silicon or gallium nitride. These are the devices that have enabled the deployment of wireless communication networks from 3G to 4G and now 5G. Meanwhile, the fiber optic connections among cell towers in a regional network — or in the backbone networks between cities and countries — contain high-speed optical transceivers that relay light pulses to and from all the links within the networks. Transceivers are the workhorses of broadband Internet.

In North America, sales of microwave and optical devices like these are managed from Silicon Valley by Sumitomo Electric Device Innovations USA. SEDU is led by President & CEO Scott Parker and Chairman Ichiro (Tony) Tonai, who were both promoted to their current positions on October 1st. Their perspectives on the Sumitomo Electric Group's work in infocommunications are shared below.

Scott Parker: Sumitomo's core strength is designing and manufacturing compound semiconductor devices. For example, we are the world leader in gallium nitride (GaN) based devices, which are used in power amplifiers for base stations in cellular networks. As 5G rolls out, our GaN devices will be used in the physical layer of these networks since GaN is the most efficient technology available for this application. 5G is a big deal because it's envisioned as the perfect network: high bandwidth with low latency. It's the next big thing for sure. All the major carriers in the US are doing some kind of trial right now, and while it might be a little unclear when 5G will ramp, we're right at the doorstep. Technologies like autonomous driving, virtual reality, and the Internet of Things require both high bandwidth and low latency, so there needs to be a 5G network to make those a reality.


On the optics side, you can't have high-speed Internet without fiber optics. All of your activity over the Internet — all those bits of data which make up text, pictures, and video — are traveling at some point on fiber, as light. There are different standards for network connections of different lengths, and the reason is that as distances get shorter, you can use cheaper optics because the signal doesn't need to be as precise. Where we tend to do better is on longer links that require more precise lasers such as EMLs (electro-absorption modulated lasers), which are also compound semiconductor devices. So the core of our value-add is really our ability to make these high-performance semiconductor devices that are at the foundation of both wireless networks and the Internet. All other hardware, software, and applications are built on top of the physical layer, which is where we're at and which is where the hard science is.


Tony Tonai: What is clear to our customers is that Sumitomo is not the best at making inexpensive components at large volumes. Rather, our expertise is in making devices with high performance and high reliability. Where you'll find our components is not inside set-top boxes in the home, but rather in the network equipment that is used to feed data to 32 or 64 or 128 of such terminals. In that part of the network, devices tend to be more expensive, so we continually make efforts to reduce cost.


Parker: One of the things I've noticed since joining Sumitomo, particularly in the optics business, is that when I'm in meetings with customers they have confidence in the commitments we make. This is not common in the optics industry, which is notorious for over-promising and under-delivering on commitments.


Tonai: There are customers in the US that I've known for 20 years, and they know that when I say something can't be done, it really can't be done. They believe me because of our mutual trust. We have a saying in Sumitomo: shinyo kakujitsu, which refers to our corporate philosophy of placing prime importance on integrity and sound management in the conduct of our business. In other words, trust. We always have in mind how we can build trust with the customer and maintain trust. This is the most important thing because while price is a key driver of sales in our industry, many times negotiations will come down to the one-on-one relationship you have with the customer. And when you get right down to it, nobody wants to buy from someone they can't trust. I think that's true in any country.


Parker: Tony and I were having a conversation about this, and I said I'm really impressed by these corporate principles and how this is a real thing here. So I asked him, is this a Japanese thing? He replied that while these values are common in Japan they are a particularly important part of Sumitomo culture. Tony then asked me what kind of company, culture wise, I would want to build. We talked about this for a while, and when I asked him the same question, he said "I want to work for a company that I would want my children to work at." And he added, "I believe Sumitomo is that kind of company." In my mind, that answer encapsulates the culture of our organization. I thought that was a great answer.


Tonai: All the business we have today is the result of building trust over the years. I remember one time, several years ago, when we were developing a new transceiver. As we were doing reliability tests, we found that light from the transceiver's laser would drift ever so slightly from the specified wavelength after an extended period of use. This was an issue because the application had very strict performance requirements on wavelength stability over thousands of hours of operation. On our side, we struggled to determine the cause of the issue. But because the customer was confident that we would ultimately be able to deliver a high-quality product, they were willing to have deep technical discussions with us. By trusting each other and sharing our knowledge, after some time we were able to resolve the issue. In fact, the product which came out of that development, a type of DWDM module, went on to become a very successful product. It was the result of the great working relationship we had with the customer. I think that is vital especially in this industry, which experiences such extreme cycling between highs and lows, due to economic factors like when the IT bubble burst in 2001 and the Lehman shock in 2008, as well as due to generational improvements in the various technologies.


Parker: What I don't think you can fully appreciate until you are on the inside, so to speak, is the rich 400-year culture the company has that starts from a real place of integrity and altruism. Profitability sustains the ability to impact the well-being and safety of employees, as well as the well-being of the communities that the company serves. So while we're not world-class at everything, the rich technology, the high quality, the high integrity — these are all right here.

Sumitomo Electric Device Innovations USA is a leading supplier of optical components and modules to the telecom, CATV, broadband, and data communications markets. This includes a wide array of transceivers, transmitters, receivers, lasers, photodiodes, and passive components. SEDU also provides a comprehensive line of RF high-power wireless solutions. SEDU focuses on the Americas market, while drawing on the global presence of the Sumitomo Electric Group to provide comprehensive support to customer facilities throughout the world. For more information, visit sei-device.com